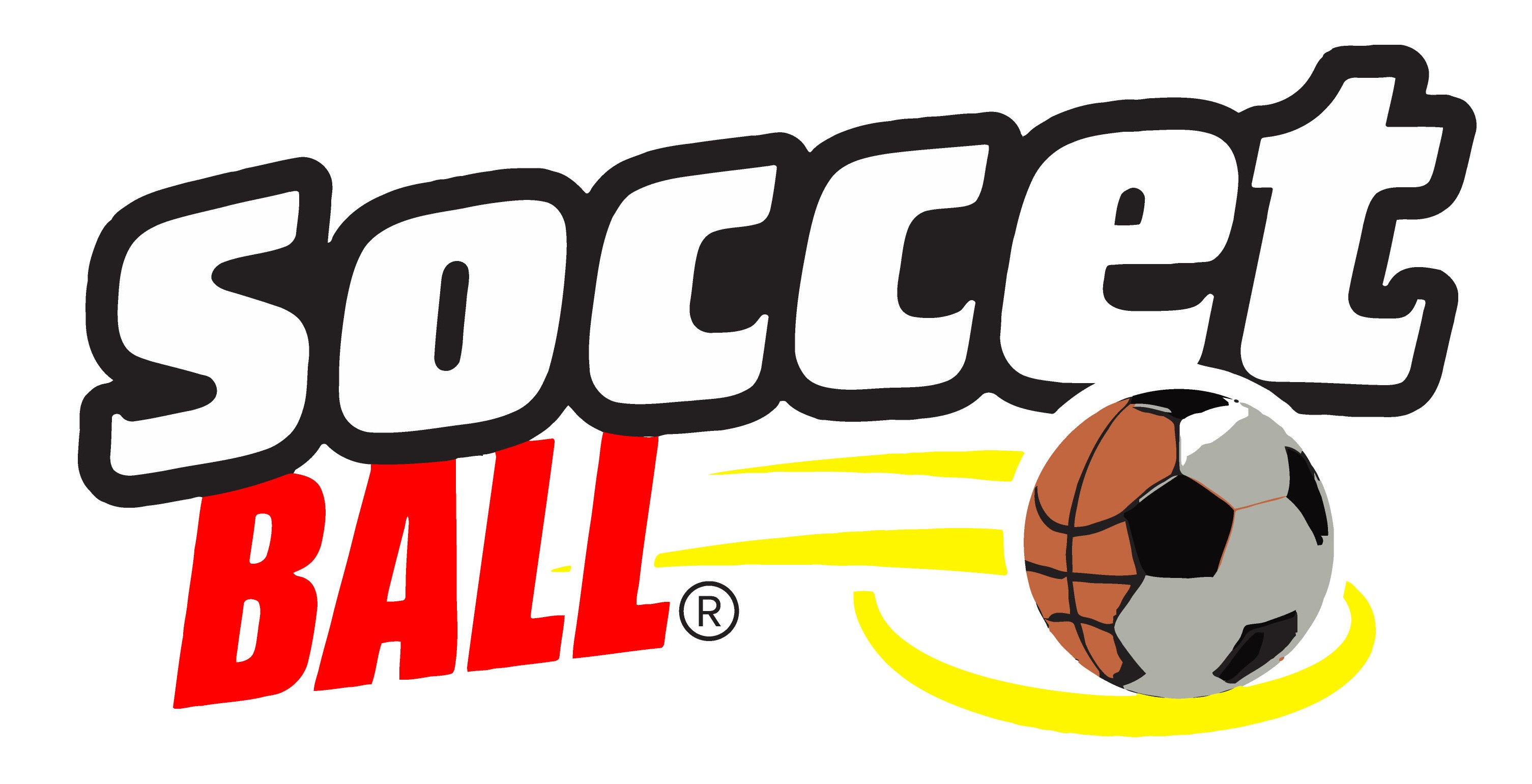 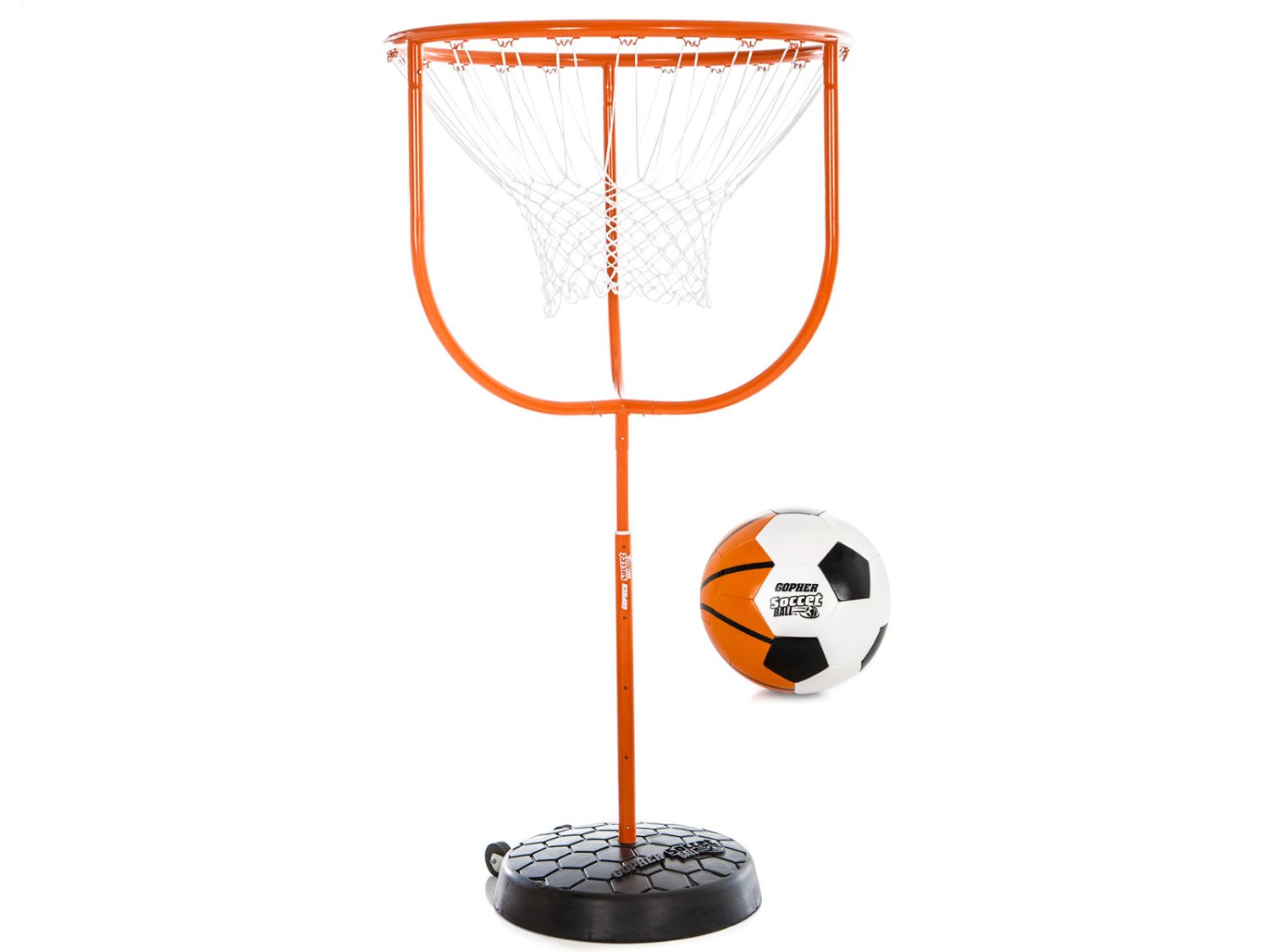 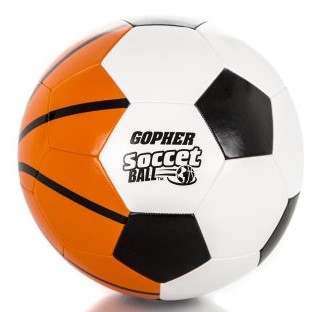 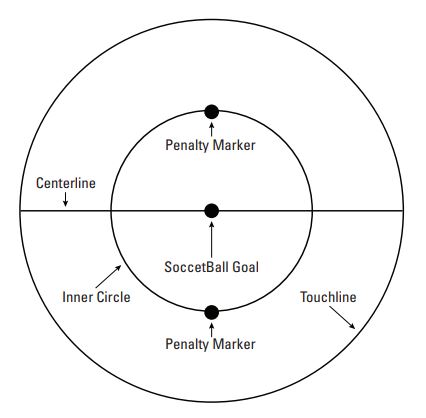 TEAMS:  Three-on-Three SoccetBall Tournament Games consist of two teams with three players on each team.  Unlimited substitutions are allowed and may only be substituted after a point is scored by either team.

GAME SETUP:  SoccetBall is essentially played like soccer except that there is only one large, elevated basket situated at the middle of the play area which serves as the goal for both teams. The game shall be 30-minutes long with two 15-minute halves.  The clock shall run continually without being stopped.  The touchline, or out-of-bounds lines, shall be defined by the referee (such as the basketball court lines, soccer field, or driveway, for example).

KICKOFF:  A pre-game coin toss determines which team gets the ball first.  The game starts with the referee placing the ball anywhere just outside the touchline.  A player then kicks the ball into play by performing an indirect kick, meaning that another player must touch the ball before a point can be scored.  Players make contact with the ball using the same contact rules as traditional soccer.  No hands are allowed except for inbounding the ball.

SCORING:  Both teams may shoot at any time at the one goal located in the middle of the play area.  The last player to touch the ball before it goes into the goal, scores one point for his team.  After a point is scored, the opposing team places the ball just outside the touchline and performs an indirect kick to put the ball back into play.

INBOUNDING:  If the ball goes out-of-bounds, then the opposing team shall inbound the ball using a soccer-style throw-in.  The ball is thrown in with both hands overhead while both feet remain on the ground. No point is credited if the ball is thrown or bounced directly into the goal without first making contact with another player.

FOULS:  The following are considered fouls in SoccetBall:  intentional hand-balls, goal-tending, tripping, holding, high-kicks, dangerous headers, recklessness or violent contact.  Goal-tending is defined as either obstructing the ball once it enters inside the cylinder above the rim or defending the goal rather than the opponent.  The defense must focus on attacking the ball and covering the opposing players rather than defending the goal.  There are no goalies in SoccetBall.

PENALTY KICKS:  All fouls result in a penalty kick.  For penalty kicks, the referee shall place the ball on one of the two penalty markers which are located 23-feet away from the goal.  Penalty kicks are direct kicks, meaning that the kicker has the option of either scoring directly or passing the ball.  Before the penalty kick is taken, all players from both teams must position themselves on the opposite side of the centerline from the designated kicker.  If the kicker misses the goal, then the ball may be immediately rebounded and put into play by anyone on either team.  This means that either team can score a one-touch basket during a penalty kick.

WINNERS:  The team with the most points at the end of the game is the winner.  In the event of a tie, the game shall be extended into overtime until a golden goal is scored.  In other words, the first team to score a goal during overtime wins the game. 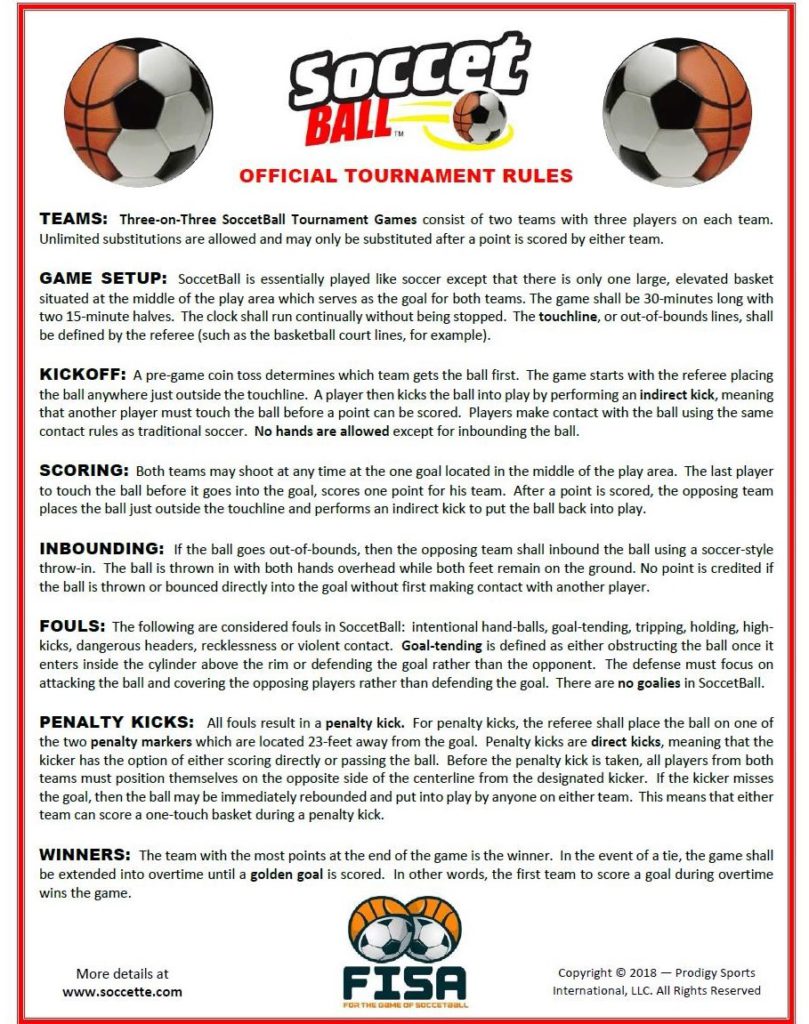 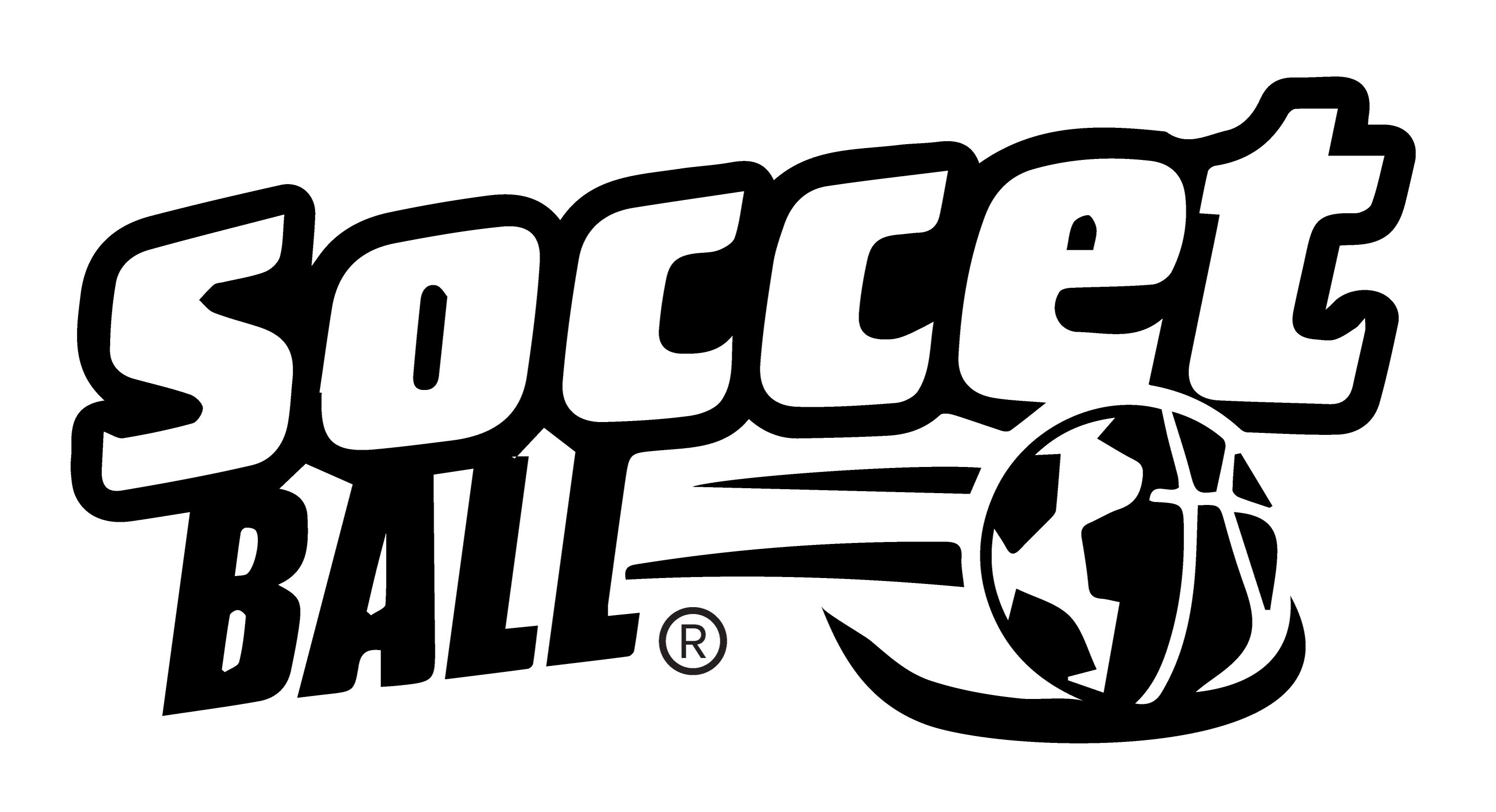 As always in SoccetBall, the goal of the game is to kick, to head or to knee the ball into the goal without using your hands.   Place the SoccetBall goal at the center of the play area.   This time divide the players up into two teams.  These teams can have as many or as few players as you may want.  Use either the Official SoccetBall ball or a soccer ball based on the ages and skill level of the players.  One team will start the game by placing the ball on the ground and kicking it into play.  The last person on a given team to touch the ball, before it goes into the goal, is awarded a point for their team.  After a scored point, the opposing team gets to kick the ball back into play from outside of the playing area.

The Playing Area:  this is what makes SoccetBall so flexible as a game.  You can play on a basketball court by simply using the basketball sidelines as the boundaries. Or you can draw a circular boundary line with chalk on the blacktop, draw the boundaries with a stick on a dirt lot, mark the boundaries on a soccer field or play with no boundaries at all. When the ball traverses the boundary line, the opposing team gets to throw the ball to his team.  The team with the most points at the end of the game wins.

Group Free-For-All Rules:   SoccetBall is played like soccer in that the goal of the game is to kick, to head or to knee the ball into the goal without using your hands.   Place the SoccetBall goal at the center of the play area.   Now position the players around the SoccetBall Goal.  Using the SoccetBall ball, throw this ball into play.   Everyone stays in their own personal zone as the ball is kicked and headed from person-to-person until someone scores.  The last person to touch the ball before it goes into the goal gets one point.  There is no out-of-bounds in this informal game.  Simply keep the ball in play.  The player with the most points at the end of the game wins. 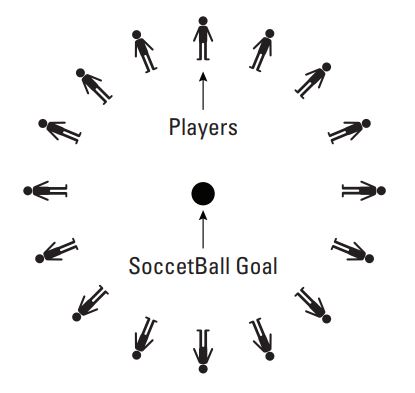 “SoccetBall is a great new soccer game that provides a fun way to develop ball control skills needed for the game of soccer.” 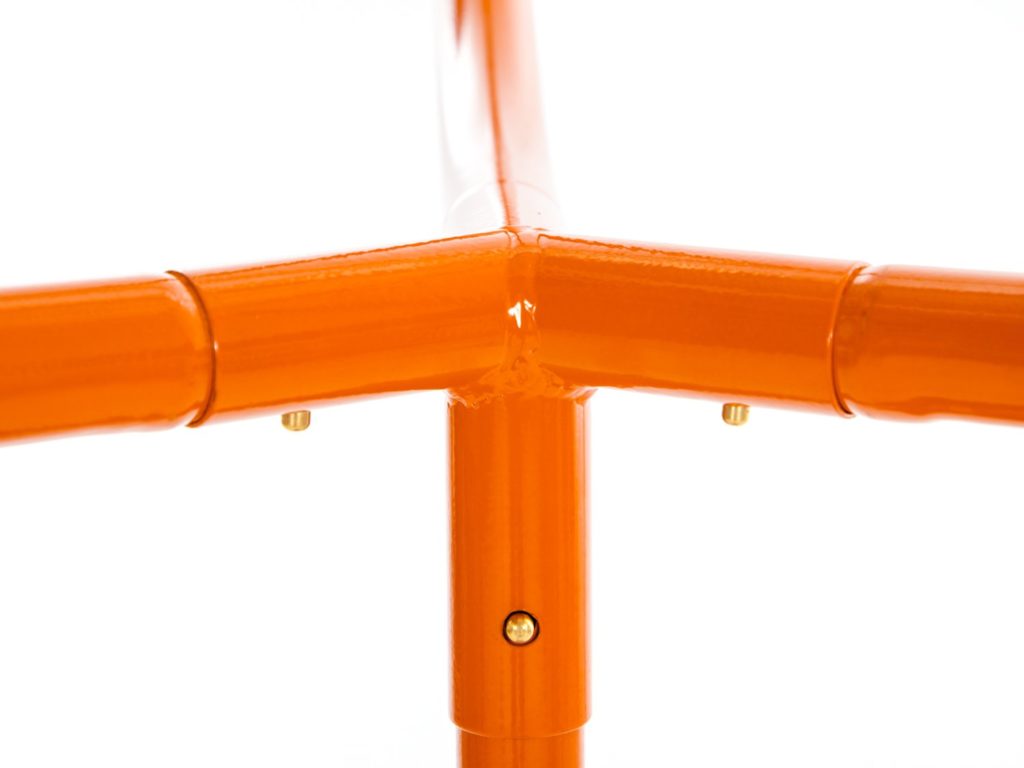